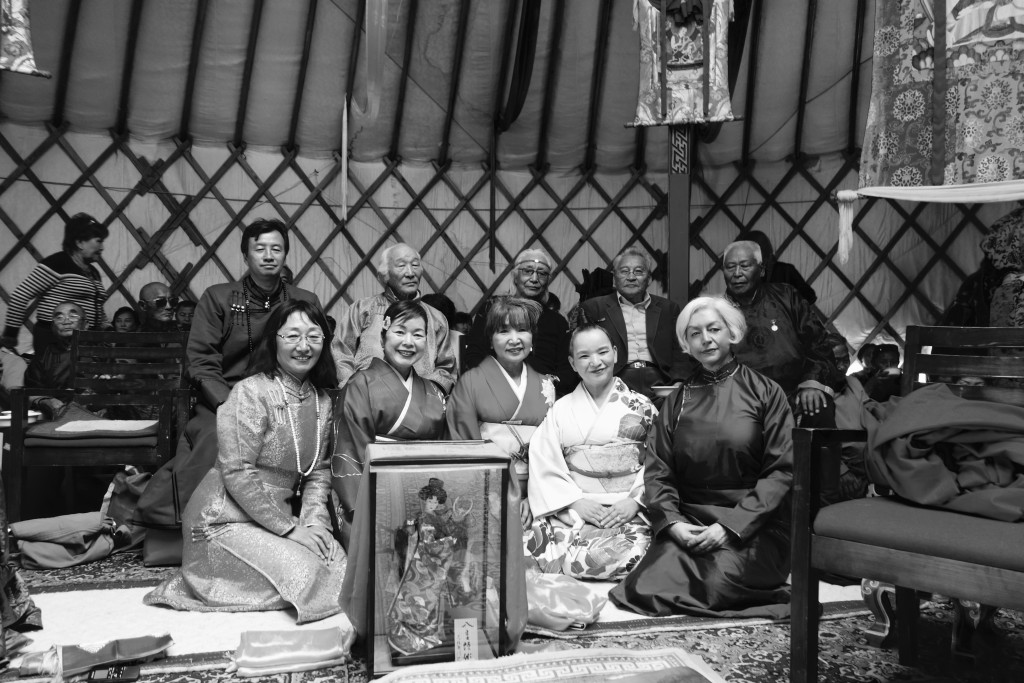 Intercultural meeting of scholars, ethnographers, poets and designers at Delgertsogt Mountain in the Dundgovi, Mongolia. 5 September 2015.

The above photograph was taken after the finale of an afternoon-long concert of traditional Mongolian singing, dancing, morin khuur and other performances kindly arranged by E. Sonintogos (Director since 2010) of the Mongolian State University of Arts and Culture (MSUAC). Faculty vocal instructors and musicians from the University as well as other entertainers not affiliated with MSUAC (such as the Director of the Newstar Music Studio in Ulanbaator) thrilled an appreciative audience with their artistic performances and technical expertise. Zagdochir (MSUAC’s Humii Teacher) not only performed, but was the very competent and entertaining Master of Ceremonies on the day.

From my own ethnographic and ‘social network theory’ perspective, the above affinity group can also be seen as a noteworthy example of one of many such ‘loosely connected’[1] social sub-groups who contributed to the day. In more technical terms, the ‘locally anchored’ (to Mongolia) ‘interest-based’ (Mongol, Buddhist, culture and society) ‘work cluster’ (exchange of academic discourse and books) can also be seen as a successful example of one of the many ‘informal economic forms that have evolved in Mongolia since 1990’ [2] that endow their active host-contributors, ‘with a sense of avoiding the worst pitfalls of the transition’ in Mongolia: through post-soviet socialism and now on to unrealised possibilities of what could reasonably be considered to come next.

It seems to me, that people who perceive themselves as potentially vulnerable to unpredictable external forces—economic, social, geo-political, whatever they may be—at times (and in response to such ‘ontological insecurity’ (see Kinnvall, C. (2004). Globalisation and Religious Nationalism: Self, Identity, and the Search for Ontological Security Political Psychology 25(5): 741-767) are drawn to co-inhabit ‘closed networks of weak connections.’[3] In terms of better understanding contemporary Mongol society and also facilitating local Mongol-led ethnographic research practice, such ‘inter-connectedness’ of Mongolians-in-Mongolia to others may well be realised as a critical determinant of their individual ‘transitional’ success.

To illustrate this point within a higher education framework with which I am more familiar,  at least three scholars in the above group (that I am aware of) already have ‘weak tie’ connections (albeit different) to other scholars of Mongolian society, literature and culture in Australia. Professor Li Narangoa and other Australian National University-auspiced scholars and students  at the Mongolian Studies Centre in Canberra (in collaboration with the Embassy of Mongolia) are an example of another affinity group ‘node’ of which I speak. I suppose that in terms of Kalish and Robins’ (2006) social network theorising within a globalising social context, my own small contribution here could be seen as that of bridging the perceived ‘structural holes’ between potentially ‘strong tie’ partners, some of whom may otherwise have remained separated, but not all.

© 2013-2021 CP in Mongolia. This post is licensed under the  Creative Commons Attribution 4.0 International License. Documents linked from this page may be subject to other restrictions.  Posted: 6 October 2015. Last updated: 29 October 2017.