Photographs in this post are courtesy of D.Monhceceg and N.Sanchir

On the 7th of December 2013 an exhibition of stage artist L.Namkhaitseren’s paintings and other artistic works was held in the main Hall of the State Opera and Ballet building in Mongolia’s capital Ulaanbator. The exhibition was held in conjunction with an anniversary performance by the Mongolian State Academic Theatre of Opera and Ballet (Монголын Дуурь Бужгийн Академийн Театр) of Peter Tchaikovsky’s well-know lyrical opera Eugene Onegin Op. 24 (Russian: Евгений Онегин, Yevgény Onégin).

The exhibition and operatic performance were the jewels in the crown of the 100th Anniversary celebrations to honour the life of Mongolian stage artist Luvsahsharav Namkhaitseren  (1913– 1992). Meticulous drawings, original paintings as well as other works associated with the cartography, stage scenery and theatrical backdrops painted by L.Namkhaitseren’s were showcased in this well-attended exhibition. His son, Namkhaitseren Sanchir (1947– ) was the Curator of the exhibition.  The overhead and other lighting of the many works in the exhibition gallery was particularly skilful. Like his father, N.Sanchir (Намхайцэрэн Санчир) is also an established Mongolian artist, an academic painter who has won the prestigious European Prize for Fine Arts awarded by the European Union of Art. 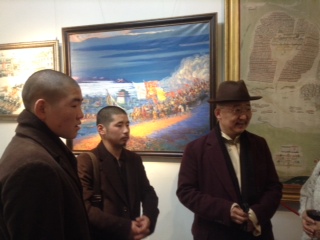 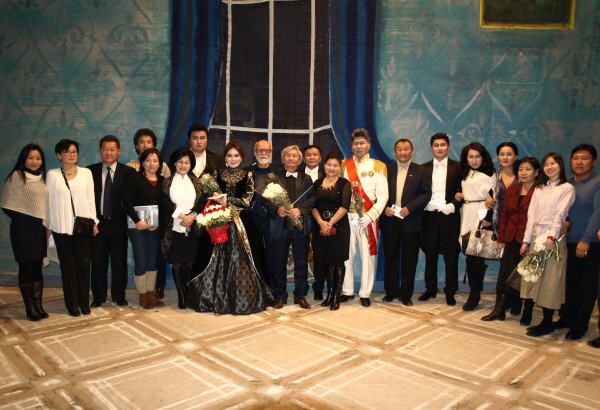 Mrs Uyanga, N.Sanchir’s wife (2nd from left); N.Sanchir and Conductor Burenbekh (centre); with principal and other performing artists of The Mongolian State Academic Theatre of Opera and Ballet after the performance of Eugene Onegin. Ulaanbaator 7 December 2013

First performed in Moscow in 1879, Eugene Onegin whose title refers to the protagonist in the opera’s drama, continues to be performed to audiences all over the world today. A score for Eugene Onegin, Op. 24 in Russian Cyrillic is available from The International Music Score Library Project. See: http://imslp.org/wiki/Eugene_Onegin,_Op.24_(Tchaikovsky,_Pyotr_Ilyich) 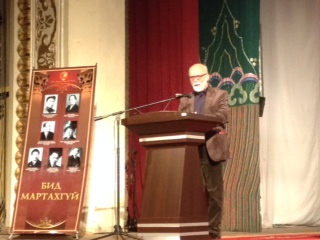 N.Sanchir giving a public address at the State Opera House in Ulaanbaator 7 December 2013.

Research enquiries: International higher degree research students of Mongolian Art History (Theatre, Opera or Ballet) who are considering post-graduate research into the life and works of Mongolian stage artists such as L.Namkhaitseren’s (and his contribution to The Mongolian State Academic Theatre of Opera and Ballet) are invited to submit a short proposal in writing to N. Sanchir via the appropriate Theatre channels.

© 2013-2018 CP in Mongolia. This post is licensed under the  Creative Commons Attribution 4.0 International License. Documents linked from this page may be subject to other restrictions.   Posted: 17 January 2014. Last updated: 29 October 2017.