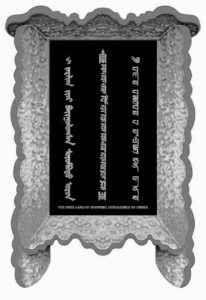 The above tablet is one artefact (in a complex of many such detailed and elaborate visual representations and signifiers associated with the recent opening and consecration of the new temple, Соёнбот орон, at Delgeruun Choira) designed to invoke a particular historicised Khalkha Mongol  (Mon: Халх; Khalkh, Halh) pre-soviet socialist era cultural past: an ‘inheritance’ deemed worthy, now being reimagined and rendered in a contemporary way for an unfolding in Mongolia post-soviet socialist present.

‘Symbol of Mongolian independence (sometimes spelled ‘soyonbo’), the soyombo  symbol [the composite graphic element on top of central column of vertical script in the image above] has been used as the Mongolian emblem on the state seal, national flag, identity cards, passports, and other official documents since 1911.

The soyombo symbol is a mystic device centered on a yin and yang symbol, with vertical bars left and right, horizontal bars and “arrow heads” above and below, the whole surmounted by the sun, moon, and flames. Initially it stood on a wreath of lotus; from 1945-1992 it was surmounted by a communist five-pointed star.

It may be much older, but the soyombo is usually attributed to Zanabazar (see below), the first Bogd Gegeen who developed on its basis a script for the Mongol language similar to the Devanagari script of Sanskrit. In the communist period the origins of the soyombo symbol  were “socialized,” the yin and yang being described as “two vigilant fish.” According to one theory, the various parts of the soyombo represent, besides the sun and moon, the five elements (wood, fire, earth, iron, and water).’ (Sanders 1996, p185)

He also created a new script, the soyombo script, into which he translated a number of scriptures. The soyombo symbol found at the inception of every text written in this script, became the symbol of the Khalkha as the people of the Jibzundamba and is now on the Mongolian national flag.’ (Atwood 2004, p273).

The independent British scholar Alan J K Saunders and the American academic Chris Atwood write from the perspective of a Mongolist. However, in terms of a historical Mongol-Tibetan cultural interface, a conceptual dyad with echoes in contemporary socio-cultural reality,  John Powers and David Templeman (2012, p745), two Australian scholars and Tibetologists, present the following additional perspective:

‘Zanabazar [was] the most influential reincarnational lineage in Mongolian Buddhism. His successors became rulers of Mongolia. He is considered to be the reincarnation of the Tibetan philosopher and historian Tā ra nā tha (Tāranātha; 1575–1634), but according to his biography he explicitly rejected the identification: he reportedly declared that he had been recognized as Tāranātha without really being Tāranātha, and as a result he was authorized to act as Tāranātha.

He was born among the Khalkha Mongols. His father was Tüsheet Khan Gombodorj, one of the three Khalkha khans, and his mother was named Khandojamtso. He was named Ishdorj at birth. In 1640 he was recognized as a reincarnate lama (sprul sku) by the fourth Paṇ chen bla ma, bLo bzang chos kyi rgyal mtshan (1567–1662), and the fifth Dalai Lama, Ngag dbang blo bzang rgya mtsho (1617–1682).

He apparently understood that his recognition served an important political purpose; Tāranātha had been at odds with the dGe lugs pa hierarchs, and by declaring his successor to have taken residence in a faraway region of Mongolia, they effectively eliminated him from their main sphere of influence. Thus their former enemy would be assimilated by their Mongol allies.

He was enthroned at Örgöö in Övörkhangai, about 644 km (400 mi.) from Ulaanbaator. He became the head of the dGe lugs order in Mongolia, and in 1647 he founded one of the first major dGe lugs monasteries in the region, Shankh Khiid (Mon. Шанх хийд).

In addition to his religious activities, he was an influential scholar and artist. He was an accomplished musician and composer and was famous for his bronze casting and painting. He created a new design for monastic robes, and in 1686 he developed the soyombo script (which is based on the Lan tsha script). He also created the Quadratic Script, which is based on the Tibetan and ’Phags pa scripts.’ (see above)

And finally, in terms of visual symbols, also with social, cultural, political as well as economic import in Mongol culture,  the concept of tamga is also of relevance here.

‘Tamga are traditional seals. The use of stone or metal seals by Mongol rulers dates back to the times of the Mongol Empire—a letter sent by Güyük Khan to the Pope in 1246 bears the stamp of a seal in the Mongol script declaring that all should fear the decree of the Mongol Khan who rules by the mandate of Eternal Heaven (Mönh Tenger).

After the disintegration of the empire, the use of personal seals continued among the khans of Halh and the Oirat people, the seal of the Bogd Khan was inscribed in the ‘Phags-pa, soyombo symbol and Mongolian classical scripts.

After the 1921 revolution, the “people’s government” designed its own seals on the basis of the soyombo symbol. The word ‘tamga’ is also used for livestock brands to identify ownership. This traditional practice was banned for much of the communist period but reintroduced by the negdel in the 1980s to try to ensure proper care of collectively owned animals. Branding has become widespread since the dissolution of the negdel and many different brands are used, ranging from modern letters and numbers to ancient geometric designs.’  (Sanders 1996, p191).

The english translation of the Mongolian (in Cyrillic script)  ‘Соёнбот’ is Soyombo.  ‘Oрон’ translates into English as ‘country.’

Written by C.Pleteshner, Research Fellow, Nomadic and Buddhist Philosophies for The Zava Damdin Scripture and Sutra Institute of Mongolia.

© 2013-2022. CP in Mongolia. This post is licensed under the Creative Commons Attribution 4.0 International License. Documents linked from this page may be subject to other restrictions. Posted: 23 August 2017. Last updated: 20 June 2022.